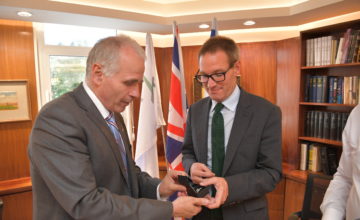 Just a few weeks in his new role as Britain’s Ambassador to Israel, HE Neil Wigan OBE enjoyed his first visit to the Hebrew University’s Mount Scopus campus.

The visit included a short campus tour covering the very British history of the Hebrew University as depicted in the large painting of the opening ceremony in 1925, the ‘Nobel’ Wall with background details of the eight Hebrew University Nobel Prize winners, the renowned Institute of Archaeology, various historic locations on campus while taking in spectacular views from Mount Scopus.

In the modern building of the Mandel School for the study of Advanced Humanities, the Ambassador had the opportunity to meet and chat with students, funded or part-funded by the British Council.