Moshe Carmel was a well-known figure in Jerusalem in the 1970s and ‘80s. First he worked as a salesman in a furniture store; later he headed a chain of furniture stores. Then he became the proud owner of some of the best-known hot spots in town, among them the Chinese restaurant Mandarin and the club Metzuda.

He also owned the Lido restaurant on the Dead Sea and was a co-owner with the singer Aris San of the Aris San restaurant in Jaffa.

When Carmel died 20 years ago, he left a secret: four albums of pictures he had rescued from a burning photography store in Jerusalem during the 1947-49 War of Independence.

The albums, which he kept wrapped in wool blankets in a closet in his home, contain hundreds of photos showing events from the riots of 1929 to the battles of 1948. They include his underground activities against the British before the War of Independence and the beginnings of the Hebrew University of Jerusalem. Some include scenes documented nowhere else. 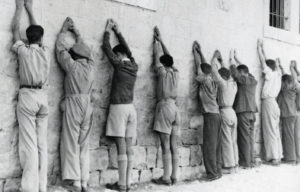 At least two of the albums are linked to the photography department of Jerusalem’s American Colony neighbourhood; they contain pictures of the area. They may have been catalogues used by the photography store from which customers would choose a photo they wanted to print.

The American Colony Photography Department, which was in operation from the end of the 19th century, is considered to have produced some of the most important documentation of the city at the time. Some of these pictures are known from other collections, especially the Matson photograph collection in the U.S. Library of Congress, which contains thousands of photos of the American Colony.

The albums also include detailed captions in English for every picture. The names of famous Arab photographers Ibrahim Risas and Khalil Raad are stamped on the back of some of the photos.

Carmel was born in 1919 in Jerusalem’s Geula neighbourhood. In the 1930s he joined the Etzel pre-state underground and during the War of Independence he served in north Jerusalem near the Sheikh Jarrah neighbourhood. He said that during the fighting he found himself in a photography store that had been shelled and caught fire; he tried to save what he could.

His wife Batya, who kept the photos, died in 2005. Four years ago their son Roni donated the albums to Hebrew University’s Ben Zvi Institute. 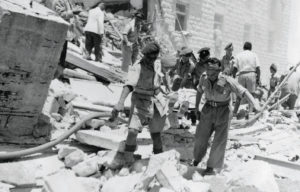 The aftermath of the 1946 attack on the King David Hotel in Jerusalem Credit: Moshe and Batya Carmel collection

“My mother had wrapped the albums in blankets and no one knew about them except for the family,” Roni said. “Sometimes when I was sick and there was no television or phone, they would take them out for me. After my mother died I decided, enough, there’s no reason for them to stay in the closet.”

The photos, which were researched by Lavi Shay and Yoram Ilan of the Ben Zvi Institute archive, went on display last week at the institute in an exhibit on the anniversary of the Balfour Declaration, which was issued on November 29, 1917.

According to the exhibit’s curator, Nirit Shalev-Khalifa, and the curator of the American Colony Hotel, Rachel Lev, the store where the albums were found was in the city’s Mamilla neighbourhood.

The photos in one album show the extensive damage caused by Arab attacks on Jewish communities and vice versa in the 1929 riots. It includes pictures of ruined and burned houses of the Jewish community of Hebron, the homes of the Makleff and Broza families in Motza near Jerusalem, and the wounded and the dead.

There are also photos of the attack by Jews on the Nebi Akasha Mosque in central Jerusalem. The spokesman of the Jewish community in Hebron, Noam Arnon, an expert on photos documenting the 1929 Hebron riots, concedes that he doesn’t know most of the photos from Carmel’s album.

“The riots were on Saturday, Jews weren’t taking pictures,” he said. Other photos show the British forces sent to quell the riots and Arab protest demonstrations. 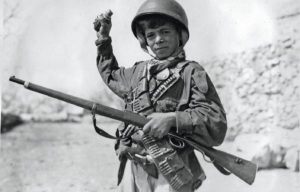 Another album is devoted to Hebrew University, showing the buildings, students, faculty, laboratories and library in the ‘30s. Some of the photos are known from the Matson collection. For people who know the university’s huge campus today, the pictures from those days are a painful reminder of the site’s lost beauty.

A third album has photos of the bloody incidents that preceded the War of Independence, among them the evacuation of the wounded from the bombing of the King David Hotel in July 1946, and the damage from the terror attack on Ben Yehuda Street in February 1948. Also documented is the removal of the bodies of the two British sergeants whom the Etzel executed near Netanya in July 1947.

The album that documents 1948 contains dozens of photos of fighters and battles from that year. Many of them show the Arab irregulars of the Holy War Army who fought in Jerusalem under the command of Abdel-Qader al-Husseini.

The fighters are shown training, setting out on operations, and taking part in ambushes and battles. Among the people who appear frequently are Husseini, his uncle, Mufti Haj Amin al-Husseini, and the commander of the Arab Liberation Army, Fauzi al-Qawuqji.

The photos are also important for research into the American Colony Photography Department. That huge collection found its way into collections all over the world, and the fate of some of the pictures and negatives is still unknown. The albums saved by Carmel apparently include some previously unknown American Colony photographs.

These albums were “part of the life story of Moshe Carmel, who was a witness to the events and also froze them in time. Now they have been revealed to the public with the various interpretations they can be given,” said Shalev-Khalifa, the Ben Zvi exhibition curator

Of Moshe Carmel, his son Roni says his father was “a very special man. My aunt said he took the albums because he realized that one day someone would want to see these things, that it was important that they not be lost.”

As originally published by HAARETZ online on Dec 09,2018 by Nir Hasson