For the 19th year in a row, Harvard University topped the ranking list, with Stanford University and the University Cambridge in the No. 2 and No. 3 seats, respectively. HU is not alone among Israeli universities in the Top 100. Israel’s Weizman Institute of Science placed 92nd and the Technion- Institute of Technology 94th. Last year, HU had placed in the 101-150 category. This year, HU managed to surpass several leading universities in its ranking.

Upon hearing the news, HU President Professor Asher Cohen shared, “The proof is in the pudding. Hebrew University’s ongoing commitment to excellence and innovation has placed it among the world’s leading academic institutions. This ranking is a tribute to the standard of excellence demonstrated day in and day out by Hebrew University staff, students and professors alike.” Cohen went on and added, “The coronavirus pandemic demonstrated to the world the importance of strong research and scientific scholarship. With three Israeli academic institutions in the Top 100, I feel confident that Israel will make it through and that our researchers will continue to be a guiding light and a positive influence both at home and abroad.”

Shanghai Ranking Consultancy, the independent body which publishes the yearly ARWU, bases its rankings on several key indicators, including the number of alumni and staff awarded Nobel Laureates and Fields Medalists, the number of highly-cited researchers and the number of articles published in the prestigious journals Nature and Science, among other criteria. 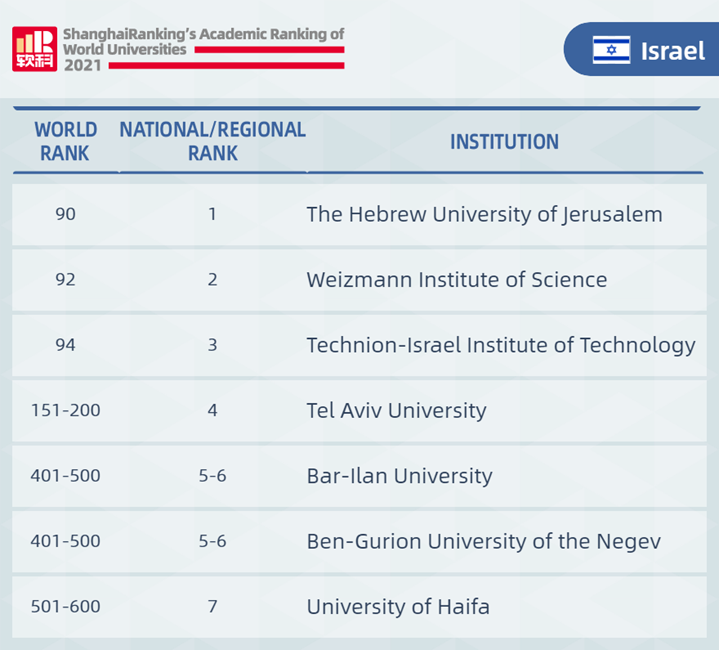 For the complete list of university rankings, visit http://www.shanghairanking.com